How to Write & Punctuate Dialogue in Your Story w/Examples

It’s weird the kind of questions or insecurities that come into your mind when you finally decide to take the plunge and write a book. One of those curious doubts that crept into my head when I sat down to write my first novel was around what I call the “mechanics” of writing and formatting your story. The first one that popped into my head was a question around formatting dialogue properly. One of the goals of this site is to answer some of the common questions I had and make it easier for new authors who might have the same questions moving forward. In this article, you will find how to write, punctuate, and format dialogue in your story correctly the first time, every time.

First, let’s clear something up. Yes, there are hard and fast accepted rules when it comes to formatting your dialogue in a story. This article will focus on the mechanics of writing, punctuating dialogue correctly, aka. within those accepted conventions. We won’t be focusing on how to write good dialogue, which is an entirely different topic. But if you want to make sure you are words that are coming out of your characters mouths are formatted in a way that won’t distract your reader or make your book seem amateurish due to poor formatting, then you’ve come to the right place.

Dialogue is a verbal conversation between two or more characters in your story. This doesn’t apply to inner monologue or the inner thoughts of your first-person point of view.  I know this is obvious but I wanted to make sure I make this article useful to even the most neophyte writer.

Dialogue Example: “You’ve got to be kidding me.” Carly replied.

Dialogue tags help attribute the speech to a specific character. They can occur before, after, or in the middle of the actual dialogue. Where the dialogue tags occur will make a difference as to how the dialogue is punctuated. Dialogue tags stay outside the quotations. We will go into specific examples of these rules later in the article.

Dialogue Tags Example: “You’ve got to be kidding me.” Carly replied

In this example, Carly Replied in red is the dialogue tag or attribution of speech to the character named Carly.

The punctuation in dialogue serves to separate the spoken words from other parts of the sentence. The dialogue itself is designated by double quotations at the beginning and end of the spoken word. Using the same basic example as above,  We’ve made the punctuation Bold and Red to illustrate the concept.

Dialogue Punctuation Example: “You’ve got to be kidding me.” Carly replied.

*Note- While Dialogue in the United States is denoted by double quotations, in the UK single quotations is used.

Let’s take a closer look at the  11 easy rules that explain how to write, punctuate, and format dialogue in specific examples.

Below you will see an example of this dialogue rule.

***UK Dialogue Formatting NOTE: In the United Kingdom they use single quotes instead of double quotations.

Dialogue Formatting Rule #2: Dialogue tags stay outside the quotes and get separated by a comma.

Here is an example of the (he said/she said portion) referred to as dialogue tags or character attribution.

Dialogue Formatting Rule #3: When dialogue ends in a question or exclamation mark, tags that follow start in lower case.

Dialogue Formatting Rule #4: Actions that occur before or after the dialogue are placed in a separate sentence.

For example, If Carly screamed and then spoke, you write it this way:

Dialogue Formatting Rule #5: On the other hand, if Carly screamed out the words that were actually spoken, use a comma instead of a period (so that it’s all part of the same sentence).

Dialogue Formatting Rule #7: If the dialogue ends with an ellipsis, do not add a comma or any other punctuation.

Dialogue Formatting Rule #8: If you have to quote something within the dialogue, use single quotation marks.

***Another UK Dialogue Note:  In the UK the inverse is true if you are quoting something in Dialogue you use double quotes since they use single quotes to denote dialogue. 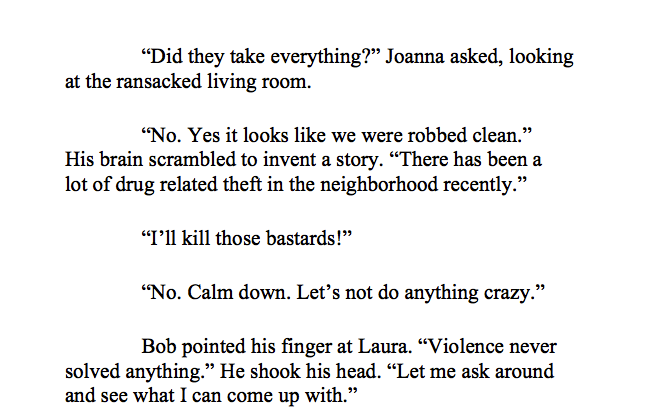 Dialogue Formatting Rule #10: If an action interrupts a sentence in the dialogue, use lower case on the first letter of the second fragment.

Dialogue Formatting Rule #11: If one character speaks long enough that multiple paragraphs are needed, start each paragraph with opening quotations, but only add closing quotations to the end of the last paragraph in the speech.

The detective explained how he solved the murder. “We found one very small but important piece of evidence at the crime scene. We found a half smoke cigarette covered in lipstick, at that moment I knew there was another only one person that could have committed that crime.

“While the crime itself required the brute force of a hulking man. The autopsy clearly showed that the victim had never been a smoker.

“So the question had to be asked if the victim didn’t smoke and the killer was obviously a man, why was there lipstick-stained cigarette at the crime scene.

“Oliver Simpson had a rap sheet a mile long, one charge he had been charged with years ago was male prostitution, which he performed in drag.“

Now You Know How to Format Dialogue in Your Story.

I hope you found this post helpful. I would suggest just bookmarking it so you can quickly refer back to it when you need it. Writing quality dialogue can help bring your characters to life and really elevate your novel. But poorly punctuated or formatted dialogue can deter from what’s being said, or even worse deter from the story.

The worse thing is to distract the reader with abnormal formatting or improper punctuation that takes away from the reader’s experience. Luckily you won’t have to worry about that, because now you know how to write, punctuate, and format dialogue the right way every time.

Follow the 11 Easy Dialogue formatting rules in this article and you will deliver perfectly written dialogue in your story every single time.  I know discussing topics like the mechanics of writing is not always the most exciting, but take pride in the fact that you have identified a gap in your current writing, and more importantly, done something about it!

In the end, we writers are always trying to improve our craft. Learning how to properly format dialogue in your stories is a fundamental skill, and now it’s one that will never hold you back.

Thanks for reading and writing!